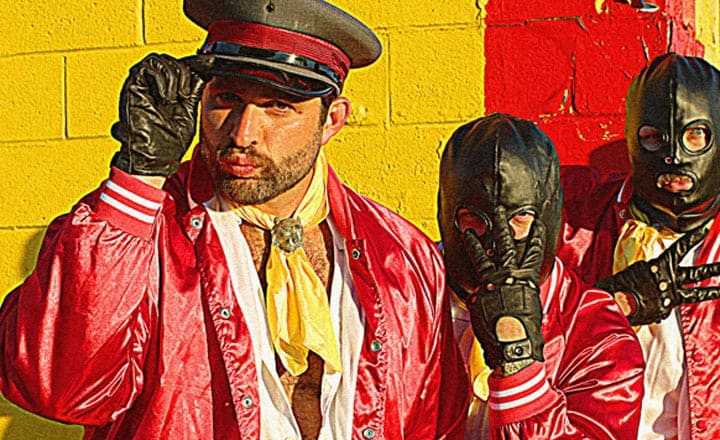 Re: PrOof Of LOVe (translation)

An international order of scouts has been assembled through sonic persuasion — a group which reads the signs and accepts the consequences each time Dboy takes the stage, or reaches out through the fourth wall into mobile hearts. And with good reason: Dboy is a message of hope; a statement of love.

Their debut album — ‘Prove Your Love (Live! In Belem)’ — attests to this. With each roar of the crowd into another instant hit, Dboy presents itself as a rock and roll warship: a self-contained sonic machine of iron, sweat, and muscle. Though as much as power defines what is almost undoubtedly the world’s foremost three piece band, it is mystery which plays a vital role in keeping the message of Dboy both oiled and primed. While undoubtedly crafted by the three wolves themselves, the world has only been made aware of the main tenets of rock and roll enterprise — a communique entitled The 13 Point Program to End Sonic Austerity — by manager Kirill Kutchokokov of Moscow. In early 2019, Dboy will be releasing their next single, ‘Dboy for President’, with a second full length to follow soon after. With these releases, the band’s campaign trail will be set off on global shores; more than a message, it is and will be an aesthetic that lays waste to sonic restrictions and creative austerity. Yet when the smoke clears and the great leveler has filled the craters, this is what those across the world believe: Dboy is here and now. We asked a simple question of ‘What does Dboy mean to you?’ to scouts across the world. Here is what we found:

cont. of “Proof of LovE (Translation)

“It means the revival and maintenance of attitude in rock and roll. Dboy is the dream that makes you want to stay asleep and be late for work and get fired” – Drew Thomson (Single Mothers/The Drew Thomson Foundation)

“Dboy is the vision of a neo-satirical utopian future where conflict is solved with firework displays and tyrants of boredom are quartered publicly by packs of hyenas. Dboy is justice and lust and freedom” – George Pettit (Alexisonfire/Dead Tired)

“Dboy are like musical fun grenades that just keep blowing up. It’s an instant party that is not easily diffused when these guys walk on stage” – Sheila (Dboy Scout, Ontario order)

“I pledge my allegiance to the almighty Dboy, ready to lay waste to the globe! To me, Dboy are the true warriors of punk shaking up the squares and making posers scared for their lives! The UK must prepare themselves for these depraved souls that will soon be taking their shores by storm. Dboy is coming for you! Consider yourselves warned!” – Liam Cormier (Cancer Bats)

“In the days of my youth, many people were chasing after a deep meaning. Now everything turned upside down. Everyone wants to chill and not to bother themselves. Besides the meaning is important or not, God bless we have Dboy. The power of love and passion sweeps all boundaries and no matter whether it’s music, art or street performance. For me, Dboy is love.” – Misha (Dboy Scout, Russian Order)

“I dont even know what my life would be like, if I had slept on February 14 and hadn’t found dboy on bandcamp. This can be called a banal coincidence of circumstances or a sign from above, but for me dboy in the first place is a complex chain of enthusiastic feelings. I unfortunately cant join the order of dboy, because as a punk journalist should remain on the periphery, but the more I learned this group and its manager, the more I wanted to become one of them.” – Sasha (unofficial Dboy Scout, Russian Order).